From Berkeleypedia
Jump to navigation Jump to search

the basic physical and organizational structures and facilities (e.g. buildings, roads, power supplies) needed for the operation of a society or enterprise. "the social and economic infrastructure of a country (city)"

We, the People of Berkeley, live in a beautiful part of the planet. For millions of year nature worked magic on the landscape, untouched by the intentions of humans. Settlers arrived, first with few permanent impacts. Later, a different mentality arrived. The Peraltas began the process of "developing" the land. Frederick Billings gave it a new name. Between the new town of Oceanview and the new campus up towards the hills, a new city congealed and grew rapidly - and the new residents were builders.

Our Inheritance, our Responsibility 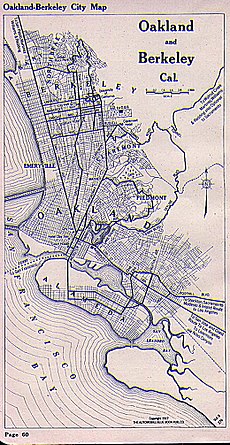 Map of Oakland and Berkeley area in 1917

In 2019, none of us were around to make the fundamental decisions that we live with now. "We" didn't lay out the streets, bury the storm drains, create the parks, build the streetcars. But we are now the stewards.

So how are we doing?

Below are links to specific issues that We the People face in maintaining and improving our "basic physical ... structures and facilities”. The imperative of good stewardship of these "assets" faces competition within the City's budget for services and pensions. It's a balance each generation must reassess.

Do we have a plan?

So many cool maps...